The title of this post has nothing to do with anything its about. I'm just sick of spending an hour looking for a clever title when the post itself takes me 15 minutes to write. And if you havn't heard, its true:Rowling Says Dumbledore Is Gay

In my search for good quotes I stumbled back upon www.overheardinnewyork.com. I used to check it quite often. Its entertaining, funny, and sometimes inspiring.

This one sounds like something I would do, if of course I somehow became a bagel guy and stayed alive after my carbohydrate intake suddenly shot through the roof:
--------------------------
Girl: I'll have a dozen bagels.
Bagel guy: I can't pass up on this opportunity. I have to tell you that you're really cute.
Girl: [Blushes.]
Bagel guy: Do you know what the difference between cute and not cute is?
Girl: ... Nooo, what?
Bagel guy: Three bagels. [Hands girl 15 bagels.]

I could copy tons which I laughed at, but I rather you just check it out yourself.

Download "I've Just Seen a Face" from the Across the Universe soundtrack while your at it, its been on loop around here the past few days. In fact, I like just about everything from that soundtrack, its a well remade collection of Beatles songs. 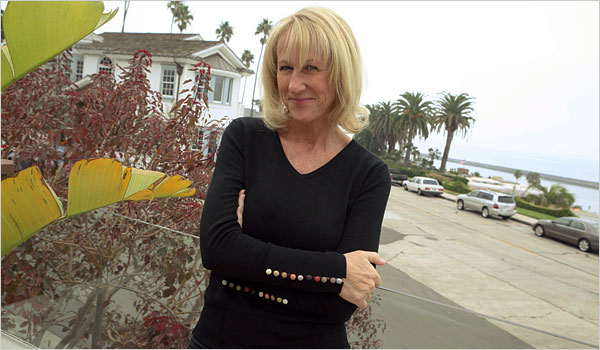 On a lark, she answered an ad for an in-house masseuse at Google, then a Silicon Valley start-up with 40 employees. She was offered the part-time job, which started out at $450 a week but included a pile of Google stock options that she figured might never be worth a penny.

After five years of kneading engineers’ backs, Ms. Brown retired, cashing in most of her stock options, which were worth millions of dollars.

Talk about employee rewards. Reminds me of the story I heard about the janitor from Microsoft standing in front of his Ferrari. Stock options have their perks if your with the right company.

Then there are people like Thomas DeGeest who, at 37, has quit his job as an IBM consultant and bought a big yellow truck out of which he sells Belgian waffles. Granted, those waffles taste amazing, but would you really turn in a well paying consultant job to sell $5 dollar waffles out of a big yellow truck you call "Waffles and Dinges". You know, I probably would. Like I've said before, if there is one reason I'm not successful in life it will be because I will drop everything I'm doing on a whim and go upstate to sell cigarettes out of my trunk for 2 months. True story. I even passed up a prestigious internship with lots of advancement opportunity.

Its like Sean Mills, the president of The Onion, "America's Finest News Source" (which happens to be headquartered in SoHo), says about his previous job on Wall Street: "I knew I wouldn't last long when I noticed my boss had a little crocheted plaque hanging on his cubicle that read, ‘Don't worry, Friday is on the way.'" Mills left that job to come work for The Onion and now feels like he has one of the best jobs he could ask for. (http://www.nypost.com/seven/11122007/jobs/dream_job__sean_mills_358771.htm)

You've got to enjoy what you do. I meet so many people in my college who are majoring in Accounting or Business because "thats where the money is". Sure, it probably is, but you'll never make enough of it because you can't be driven in a field that you have no interest in. The big money comes at the top, and the way to get to the top is by having enough passion to come to work every day with a smile and do all you can do, not because you have to, but because you want to.

I've watched my dad struggle, through what would essentially be described as just above poverty, for years while he worked for one of my uncles doing a job he clearly did not enjoy. He is a musician at heart, and doing anything other then music did not give him any sense of fulfillment other then what comes from being able to pay the bills month to month. Then one day he met the leader of an Italian wedding band and got himself a weekend gig as a drummer. He still kept his previous job to pay the bills but did what he loved on the weekends. It was the first time I saw my dad happy to go to work. After a while he met a Russian wedding band leader, who happened to also be an up and coming NYC based Russian producer. Taking a huge risk he quit his day job and started perusing his music dreams full time. That was when I watched him, now without a day job, fall into massive debt. The thing about my father is that even when he was down to his last $5, that $5 was spent on taking me to get a milkshake. Even when he was broke, he was happy, because come 8pm he would be behind his drum set doing what he loved. Fast forward 5 years and he is now producing himself and riding around in limos on tour with huge Russian celebs. Even if he had achieved any sort of success at his old job, I doubt he would ever be as content with his life as he is working in the music business.

Not much else to say about today. I chuckle at the fact that last week my grandmother gave me a piece of paper with the name and number of a "tall and beautiful granddaughter of one of my friends who goes to your school". I'll give her credit for prefacing with "you probably don't need it and won't call". At least she knows.

Okay Im sorry but that little convo between bagel boy and chick raises a question for me. Why does he hand her 15 bagels when she asks for a dozen?

Is he an uneducated bagel boy or is he giving her the extra 3 to make the differnece between cute and not cute?

I dnno. That ruined it for me.

Please God tell me that that comment was a joke anonymous.